"Harry Styles" is the eponymous debut studio album by English singer and songwriter Harry Styles. The album was released on 12 May 2017, through Columbia Records and Styles' own label, Erskine Records.[1]

The record has been described by various music publications as a collection of soft rock, rock, Britpop and pop. It was preceded by the release of its lead single, "Sign of the Times", while "Two Ghosts" and "Kiwi" served as the second and third singles, respectively.

In August 2015, One Direction announced that an extended hiatus would take place following the release of their fifth studio album.[2] In January 2016, Us Weekly published a report claiming that the group's hiatus would, in fact, become a permanent split, noting that each of the four remaining group members did not renew their contracts following the completion of the On the Road Again Tour in October 2015.[3] Representatives for the group denied the report in a statement to Billboard, stating, "nothing has changed regarding hiatus plans for the group, and all will be revealed in due time from the band members' own mouths".[4][5]

In February 2016, it was confirmed that Styles had left the group's management,[6] becoming the second member of the band to do so after Zayn Malik's departure almost a year prior.[7] In June, it was confirmed that Styles had signed a recording contract with Columbia Records.[8] Recording sessions for the album took place in a number of locations, including in Los Angeles, London, and the Gee Jam Hotel Recording Studio in Port Antonio, Jamaica, where Styles and his production team had a two-month writing retreat in the autumn of 2016.[9]

On 31 March 2017, Styles announced the album's lead single to be "Sign of the Times", which was released on 7 April.[10] The album name, artwork, and track list were revealed on 13 April.[11] The album track "Sweet Creature" was released as a promotional single on 2 May.[12] Styles performed the songs "Sign of the Times" and "Ever Since New York" on the 15 April episode of Saturday Night Live.[13] On 21 April, Styles appeared on The Graham Norton Show for his first televised solo performance in his native country,[14] and guested on the French talk show, Quotidien, five days later; he performed "Sign of the Times" on both shows.[15]

On 9 May, Styles performed the tracks "Carolina", "Sign of the Times", "Ever Since New York", and a cover of One Direction's "Stockholm Syndrome" on The Today Show.[16] On 13 May, a day after the album's release, he held a surprise concert at The Garage in London.[17][18] Styles held a similar show at the Troubadour in Los Angeles on 19 May, and invited Fleetwood Mac's Stevie Nicks to perform as a special guest. Proceeds from both shows were donated to charity.[19] On 15 May, Harry Styles: Behind the Album was released exclusively on Apple Music, a 49-minute documentary film showing footage from his writing and recording sessions in Jamaica and Los Angeles; The Performances version features a full-length live performance of the album filmed at London's Abbey Road Studios.[20] Styles was the musical guest on The Late Late Show with James Corden every night in the week spanning from 15 to 18 May, and performed in various sketches alongside Corden.[21][22] In support of the album, Styles embarked on his first solo tour, Harry Styles: Live on Tour, which ran from September 2017 through to July 2018 and visited North America, Europe, Asia, Oceania, and South America.[23] On tour, Styles debuted two unreleased songs, "Oh Anna" and "Medicine", which were originally written for the album.[24]

Harry Styles: Behind the Album

A documentary to coincide with the album was announced and was released on May 15, 2017 through Apple Music. The documentary talks about Harry Styles's process and thoughts during the making of his album as well as his experience in being in the group One Direction. 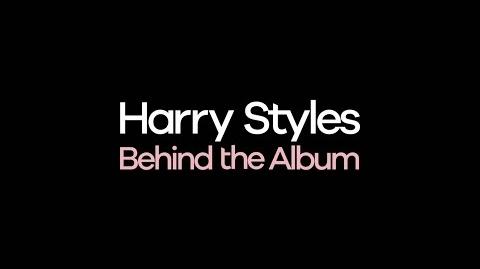 The album debuted atop the UK Albums Chart with first-week sales of almost 57,000 copies, and becomes the second One Direction member to land at number 1 solo album, following Zayn's Mind of Mine in April 2016. [26] It also debuted at number one on the US Billboard 200 with 230,000 album-equivalent units, of which 193,000 were pure album sales. [27]